Democracy literally means rule by the people. Yet in practice, democracy means that the important decisions within a society are made through public discussions, often among elected representatives. To play a productive role in political discussions, you need a set of skills that do not come naturally, which is why they have traditionally been taught in school. Unfortunately, our public schools in the United States are failing to teach these skills. Many people want to blame the students, the parents, or the teachers for this failure. Yet as I explain in Not Trivial: How Studying the Traditional Liberal Arts Can Set You Free, the public schools have been set up for failure, by policies made at a high level. 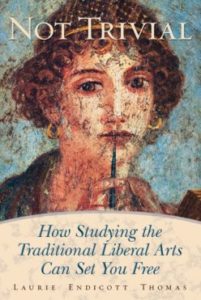 Instead of teaching children how to sound words out from left to right (phonics), teachers in the early grades have been trained and often forced to ask children to memorize whole words as shapes (sight words), without regard to the sounds encoded by the letters. As a result, millions of people who went to public schools in the United States never really learned to read. Middle and high school teachers have been told that grammar lessons do more harm than good. Thus, many Americans have learned so little about grammar that they have poor reading comprehension and are generally irrational. As a result, our political discussions are ugly and unproductive. Aristotle warned that in a setting like this, the people are likely to fall for a demagogue, who will then become a tyrant.

For centuries, grammar was valued as the first leg of the trivium, which was the language arts component of the classical liberal arts curriculum. The liberal arts are the studies that help you learn to think for yourself and to express yourself persuasively. Powerful men wanted their sons to develop those skills. However, slave owners did not want slaves to have those skills. Instead, slaves were taught the servile arts, to make them better servants. (Before the American Civil War, it was illegal in the slave states to teach slaves, or sometimes even free blacks, to read and write.)

Grammar is the study of how words are altered and combined to form meaningful sentences. Once you understand some basic principles of grammar, you can begin to study logic. Logic is the study of how sentences are combined to form arguments. Logic enables you to take facts that you know to be true and use them to figure out what else might be true. Once you have mastered the basic principles of logic, you can begin to study rhetoric, which is the art of persuasion. (Oratory is the art of persuasive speech.) We generally think of rhetoric as attempts to persuade other people. Yet by studying rhetoric, you learn the basic skills that you need for making good decisions. By studying rhetoric, you immunize yourself against propaganda.

Aristotle taught that there are three means of persuasion: logos, ethos, and pathos. Logos means evidence and logic. Logos is therefore the only consideration that matters in a purely scientific discussion (i.e., discussions about what is true). Ethos means character, such as the reputation of a speaker or writer. Sometimes, we must rely on information and advice from other people. Thus, we need to be able to tell whether someone is knowledgeable, honest, and wise. Pathos means feelings. You need logos and pathos to figure out whether something is good or bad.

After you have used logos (and maybe ethos) to figure out what your options are, you must use pathos to decide which option you prefer. If you know little about the world and have never been taught the basic rules of logic, you will have trouble with logos. You will also have trouble with ethos because you will be unable to spot fools and liars. For this reason, poorly educated people tend to use a combination of free-association and pathos instead of logic to figure out what is true. As a result, they make foolish decisions. When a critical mass of the population makes foolish decisions, the entire society is in trouble.

Once you have mastered the basics of grammar, logic, and rhetoric, you can apply them in the studies of humanity, including philosophy, history, psychology, political science, languages, literature, and so on. In particular, the techniques of literary analysis that you were supposed to learn in high school are crucial. I explain their political importance in my book Don’t Feed the Narcissists! The Mythology and Science of Mental Health.

When you read fiction, see the world from someone else’s point of view. Learning to analyze characterization, setting, and conflict in a novel helps you understand how real people respond to conflicts in real life. Thus, you learn to judge whether someone has good or bad character. If you lack this skill, you will be unable to cast your votes wisely.

In theory, the elected representatives represent the public. But we should want our elected representatives to do better than that. We should not elect people like ourselves. We should elect the sort of people whom we aspire to be: smarter, wiser, harder working, more honest, and kinder than we are. We need more than heroes, we need champions: people who stand up for other people. To be able to make those judgments about candidates, we need the skills that we should have learned in high school language arts class.

In 2016, both of the major political parties chose Presidential candidates who were deeply disliked by a large percentage of the public. It is clearly time for our nation’s language arts teachers to step forward and take back control of the public school language arts curriculum, as well as to provide some remedial education for adults. Some of us need to learn to read, and nearly all of us need to learn how to think more clearly and judge other people more accurately.