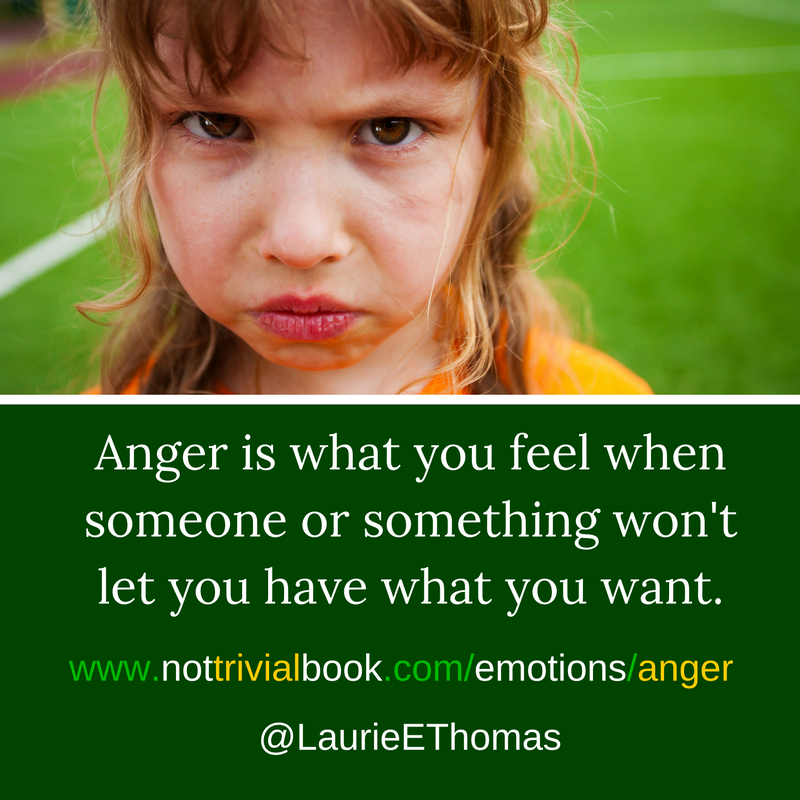 Anger is one of the seven basic emotions that cause you to have a particular facial expression, whether you want to or not. Even if you try to hide your anger, an angry expression will probably flicker across your face for a fraction of a second. These fleeting expressions are called microexpressions. Here’s a video that shows what anger looks like:

Anger is not uniquely human. Some other animals show signs of anger in the same kinds of situations that would anger a human being. Like other emotions, anger can motivate an individual to take actions that serve that individual’s needs.

Anger can be a dangerous emotion. It prepares you for the “fight” part of the “fight or flight” response. Anger can give you the strength to struggle for what you want. Whether you use that strength for good or evil purposes depends on what you want and how you try to get it.

To get along with other people, you must learn how to manage your anger. Yet anger management has become a bit of a joke. In fact, Anger Management is the title of a television comedy that ran from 2012 to 2014. Part of the problem is that the nature of anger is often misunderstood and the political context of anger is often ignored.

In theory, managing anger is simple. Anger is the emotion that you feel when someone or something is stopping you from getting what you want. There are two obvious solutions to this problem. Either stop wanting what you cannot have, or find some effective way to get what you want. In fact, this theory is the basis of the Serenity Prayer that is recited by members of Alcoholics Anonymous and other 12-step programs:

You may also feel anger when you see someone breaking some social rule, especially if you feel entitled to make and enforce the rules. In other words, you feel anger when people disobey you. In contrast, if you see that someone is treating someone else unfairly, or if you see someone doing something that you feel is “dirty,” you may feel disgust, which is a completely different emotion. However, you could feel some mixture of anger and disgust at the same time.

Anger Can Be Political!

The right of high-ranking people to use violence has often been enshrined in law. For example, Roman law gave the paterfamilias (highest ranking man of a family) extensive fatherly power (patria potestas), including the power of life and death (jus vitae necisque) over every member of his familia. The paterfamilias of a family could kill his children and slaves or even sell his children into slavery. In contrast, slaves had no right to expect anything. Thus, they were not allowed to express anger, regardless of how badly they were treated.

If low-ranking people express anger or even try to flee from abuse, they are considered to be either bad or crazy. In the 1850s, an American doctor named Samuel A. Cartwright argued that slaves who ran away from their master were exhibiting a mental illness called drapetomania.

Even today, many white people in the United States see nothing wrong with police brutality directed at unarmed black people, even at children, but become alarmed when black people take to the streets to protest police brutality, even if the protest is completely nonviolent.

Just as angry or runaway slaves were considered to be mentally ill, children today are often labeled with a psychiatric diagnosis (oppositional defiant disorder) if they express anger toward the adults in their lives. The diagnostic criteria for oppositional defiant disorder deal exclusively with the child’s expressions of anger and resentment, while saying nothing about how those adults are behaving toward that child. Although the child is the one who is labeled as mentally ill, the treatment for the problem generally involves persuading the adults in the child’s life to alter their own behavior.

During much of the 20th century, American psychiatrists tended to view practically any mental disorder in psychodynamic terms, even mental disorders that clearly seemed to be the result of a biological disorder of the brain. Today, the pendulum seems to have swung too far in the other direction. Now, practically any problem that can be given a psychiatric label is widely considered to be some sort of brain disorder that must be treated with medication. Yet oppositional and defiant children probably feel anger for the same reasons that adults feel anger: they have problems that they cannot solve. The cure for the children’s annoying behavior is probably straightforward: teach them to solve the problems that they can solve by themselves, and solve the problems that the children do not have the power to solve. If you want people to stop being angry, stop provoking them.

We see the same sort of problems with pecking order in human social hierarchies. Higher-ranking people have traditionally been given the right to use violence to control the lower-ranking individuals. Such violence has been considered normal, natural, and acceptable. In contrast, violence by low-ranking people is considered to be abnormal and frightening because it poses a threat to the social hierarchy itself.

Many psychologists believe that narcissistic rage results from insecurity that in turn results from low self-esteem. I disagree. By definition, narcissists have unrealistically high self-esteem. The problem is that the narcissist is unable to achieve a social rank that his high enough to match his or her self-esteem. The narcissist’s tantrums are actually an attempt to establish a superior position within the pecking order. For the narcissist, such tactics can often seem to work, at least with some people, at least in the short run. As a result, the obnoxious behavior may be continually reinforced. Although the narcissist may often get his or her way by throwing a tantrum, thoughtful people tend to lose respect for adults who behave like spoiled children. Thus, the narcissist’s attempt to command other people’s respect may cause those people to lose respect for the narcissist. In short, if you want respectable people to respect you, practice humility and learn to control your anger.

Just as hens use their beaks to maintain a social hierarchy, human beings often use violence or the threat of violence to maintain their social hierarchies. Wife-beating, child abuse, police brutality, cross-burning, and gay-bashing are different faces of the same basic problem: the use of violence to control the lower-ranking members of society. Of course, human beings are not chickens. We human beings can choose to live in an egalitarian society, where everyone is treated with respect. We can use reason rather than force to settle our conflicts. To use reason to settle conflicts, we must often rely on the legal system. Thus, good government is part of the solution.

In a violent society, agents of the government may commit the violence themselves or simply allow it to happen. During the days of slavery, local governments organized slave patrols to monitor and control the slaves. Even today, shocking cases of police brutality often go unpunished and even unprosecuted. So do many cases of rape. Women are warned that they must restrict their activities, to avoid being raped. Meanwhile, tens of thousands of untested rape evidence kits have been sitting in warehouses. In the United States, we fill our prisons with nonviolent offenders, while allowing serial rapists to go unprosecuted. Thus, rape and the threat of rape is used as a tool in the oppression of women. In this fascinating speech, Shreena Thakore explains how rape culture is used to control women, and why it matters why you think that rape is wrong.

If you want to solve the problem of violence, especially violence against women and children and other members of disadvantaged groups, you must address its political dimension. Attempts to teach batterers to manage their anger have generally had poor results. Batterers generally do not have a problem with anger management. They can generally manage their anger well enough when dealing with people they respect or fear. Otherwise, they would be battering their boss at work. What they need to learn is that they do not have the right to abuse the women and children in their household, and they do not have the right to bash the gay and transgender people who cross their path. Unlike a Roman paterfamilias, they do not have jus vitae necisque. They do not even have the right to dish out verbal abuse. They need to learn that they have a legal and moral obligation to behave decently toward other people, even to people who are smaller and weaker than they are